Something in the water...? 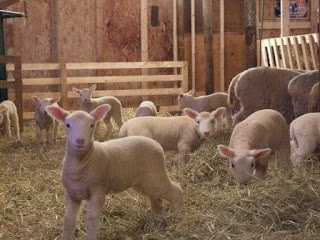 There is an unspoken assumption by conventional farmers (and some organic farmers) that organic production will always be less than conventional. In some cases, this is true. In those cases, it is usually a case of the hyper-efficient commodity farmers having a narrow focus that blocks out the long-term and focuses on the here and now profit margins. That has become somewhat of a necessity of competing in the agricultural sector we've created for ourselves. The philosophy of organics however, suggests that we are farming for the long term, on a principle of sustainability. Like the title of this blog references, while conventional producers are often farming crops, organic producers are farming soil.
In any case, that understanding of 'lower production' exists and as I said, in some cases rightfully so. It is not necessarily correct however, as our first year of organic soybean production showed us, with higher than conventional average yields. It also hasn't shown up in my sheep flock, with having 150%-200% lambing rates and no real problems with rate of gain, etc.

Until this year.
And let me make it clear that I don't think it was the organic part of my management that caused the sudden downturn, but there is no way to be sure as my management, after four years of organic, has changed in subtle ways that could have contributed, along with other factors.

I had let out the big beautiful ram we had rented with my 18 ladies and he immediately got busy. Within a couple weeks he had marked every ewe and we were feeling triumphant. I have always kept the rams in with the girls for about 60 days to ensure that two, three or even four full heat cycles have run through the flock and this time we only had him for a few over 30, so right away, we were running a higher risk of missing a couple. But with all the green hind ends (from the ram marker) around I felt pretty good about it.
We hadn't flushed the flock very well, but the ewes were looking good and I wasn't convinced as to the importance of flushing.
I've since heard that North Country Cheviots throw twins less often than many other breeds, but I don't know whether that is attributed to the ram or the ewe. My ewes have always done exceptionally well, so I have hard time blaming them for the shortfall.
The afore-mentioned shortfall is...drumroll....HALF. Half of my flock, that's NINE ewes did not catch. And those that did have lambs, mostly had singles. I have 12 little lambs running around in the barn, and as cute and as healthy as they are, they represent HALF of what could have been, not to mention HALF of what I had last year (with 6 fewer ewes).
I spent a fair bit of time this year being angry at myself for not having better management skills, for not doing...SOMEthing, anything, whatever it is that could have prevented this. How could I let this happen when things had been going so well these past years? I've become that 'lower production organic farmer' statistic that I took such pride in defying before now. 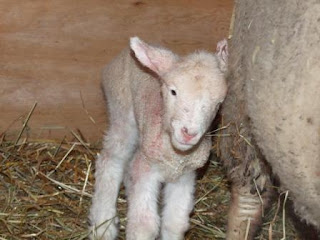 * Note: I wrote the first part of this entry a few days ago and never got around to posting it until tonight (Mar.11), after which when we went to do chores this morning, lo and behold, there is a pathetic little beast bleating around the barn.  A new lamb.  According to all my lambing charts he's a miracle, but he here is none the less.  So it's one better than half I guess.  All it took was removing all the lambing pens, Mark wrestling the remaining ewes to trim feet and marking them as barren for this season.  That's the universe you can hear laughing at me.

So, like any good farmer, I've decided to turn this downturn into my advantage, and jump into the off-season breeding and hopefully have new lambs ready for the Easter market. Since I never breed my yearlings and I have the nine ewes that didn't catch, this could potentially mean that I would have more sheep breeding in the off-season than the regular season, but maybe that would make for easier marketing of product during the summer months (when PEI's market jumps considerably in population).  Wish me luck; evidently I need it. 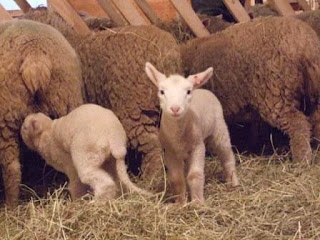 Here's a little lamb who has mastered the art of 'stealing'.  Nursing from ewes other than his mother when they are too preoccupied to care.  Survival of the fittest (or not so fit in his particular case-hence the need for stealing.)
So, don't get me wrong after all this.  I am certainly not complaining.  As you can see from the top photo, the lambs are beautiful and growing so well.  I am very happy with what I've got.  Expectations are the problem in this case.  Maybe I shouldn't have marked the ram and played roulette instead, guessing the fertilization game. Too bad you can't candle ewes like eggs to see exactly what is going on in there. I guess they call that ultrasound don't they?
Maybe another year.
Probably not.
Hope this finds you well and enjoying the warm weather!
-Sally
Posted by Sally at 10:46 PM