A June Day on the Farm in Pictures. 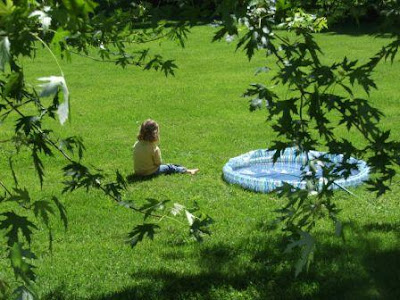 The perfect June weather-not too hot not too cold. Just right for a snack by the pool in the sun!
There is nothing less glamorous than keeping livestock during a 2 week rainy period.  Everything becomes a slick of green slime and areas that were previously safe for walking now require hip waders.  Not to mention to odour of wet wool and the humidity in the air of a barn full of panting, dripping creatures, hiding from the coyote howls.  Actually we haven't heard any coyotes lately (knock on wood), but we know they are living in our woods, so I'm not taking any precautions and am still bringing in my girls every night.  They are out in the large pasture now so back to the old barn and it's not big enough to hold them all.  If it's not raining too hard, some of them will sleep outside in the 'corral' which is really just a fenced off area outside the barn to hold the extras.  During these last weeks of rain, the corral became a treacherous stink hole of mud and manure, but as you can see below is looking MUCH better these days! 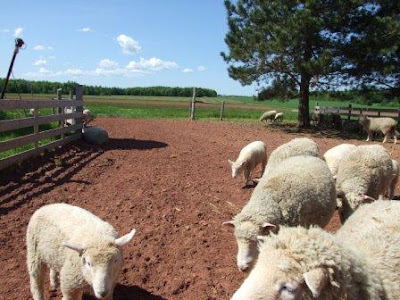 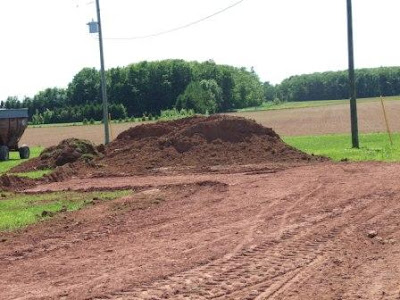 Mark had our local heavy equipment guys (the Waugh's) in to scrape and level up a new pad for his latest, large grain tank and while they were there, he got them to slip into the sheep corral and scrape out the yuck and fill it back in with some fresh 'shale'. It looks like gravel to me, but I'm told it's called 'shale'.  Must be a PEI thing.  Either way, I'm not complaining, it's much better than it was. There had been some grass growing in it and from an organic shepherdess's perspective was a prime habitat for worms, so the grass had to go.  That may seem contradictory at first, but I promise there is genuine logic to it. 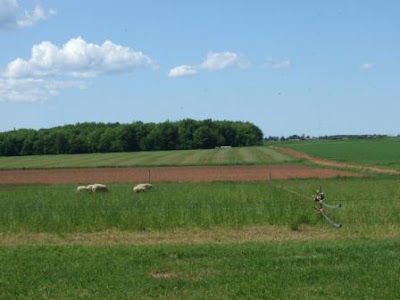 In other, sunnier news, the weather has been beautiful these last couple days and as the saying goes, "Ya gotta make hay when the sun shines." or plant clover, or finger weed or harrow in our case....
Wendell has been living in his tractor lately, getting the last of the ground ready for seeding and Mark has been finger weeding up a dust storm (yes despite two week of rain, there is dust in lots of areas).  You can see in the picture above the sheep, then red ground and then a field that looks like it's been mowed by a big golf course professional mower.  It's actually just been freshly fingerweeded and if you could see the detail better you would be able to see what an amazing job it does.  There are very clearly lines of grain showing up where it was a mat of green before.  I suggested that doing the fingerweeding when it's damp might help the weeds pull out easier, to which I was told it wouldn't make any difference.  I know from experience that weeds pull out much easier after a rain than after drought, but who am I to argue with the 'expert'.  Pffffttt. 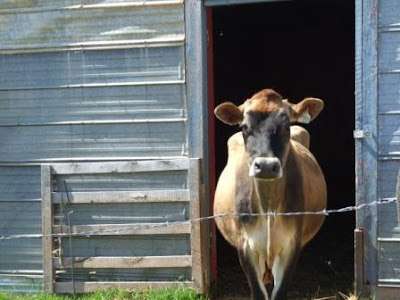 We had the vet out and he confirmed that Rosie is indeed with calf and he estimated her to be due in the fall (September), so that is exciting news from here.  A bit on the bad timing side of things, since at that time, Mark's priorities will lie somewhere besides learning to hand milk a Jersey cow and it will be left to me I'm sure, but such is the life of a patient and loving farmers wife.  PFfffffttt again! 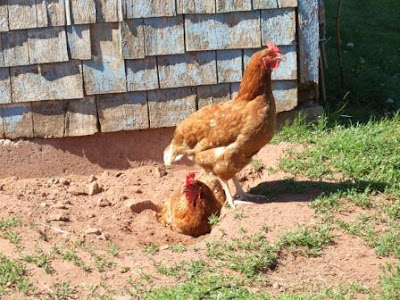 The hens are enjoying the sun over the rain as well. Here they are in their custom made dustbath.  If you've never seen a chicken have a dust bath, it's one of the funniest things.  They pretty much lay right over on their side, lay out their wings and kick up dust with one leg until there's just a cloud of it all over them.  Sometimes you can't see anything but a chicken leg kicking up a storm.  Usually there's three of them bathing at the same time and it's a dusty chaos. 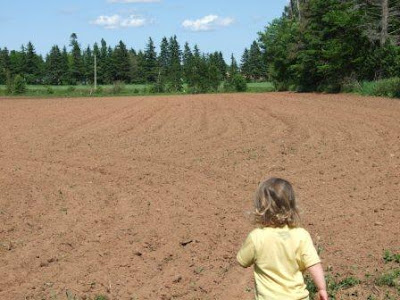 This is a field ready for planting after Wendell's harrowing today.  If you look hard you can see our trouble weed specific to this field, right above Lucy's head.  For some reason the upper corner (and spreading) is always FULL of field mint.  Back when I was writing about the new sheep barn and when we laid out the straw it smelled like mint-well this field is why.  It's a tough weed and spreads like crazy, but can be brought to a manageable level, again this year, we hope!  That is to say, we hope the crop we plant can out perform and compete with the mint that will inevitably try to take over. 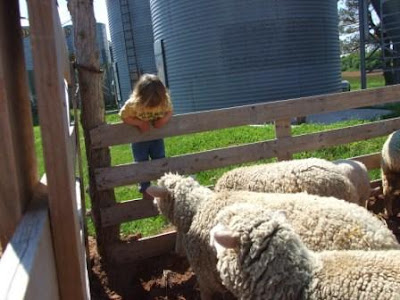 Lucy getting her toes sniffed. 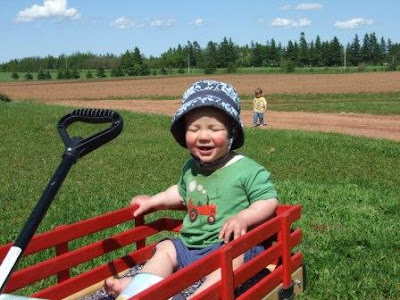 Wilson blinking at the sun, sporting his favorite shirt.  Nothing with a motor can go by without this boy craning his neck and hopping and waving while making vroom noises.
Hope this finds you with your hands in some dirt and a smile on your face!