The sheep are still knee deep in clover and living it up (if not a wee bit daggy on the rear...).  They are not so keen on the grasses that are beginning to get a bit coarse, so we've been supplementing a bit of hay until we move them onto the more permanent pasture of a better mix of grass and legumes. 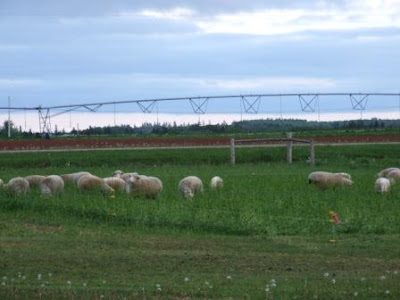 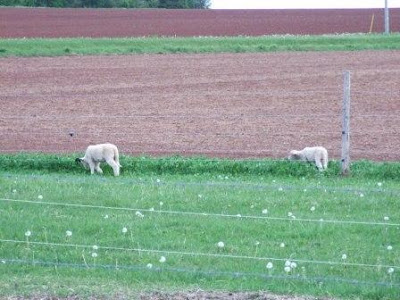 Here's a couple wee ones who snuck through the fence in search of...greener pastures?  Obviously those little hooves don't make very good ground rods, despite the little drench of rain we've been getting lately. Finally, here are the new additions.  It's spring, and like the rest of us, they could use a new do for the new season and whaddaya know!?  They're getting one.  These are 'hair sheep' who don't need sheared because they shed their coat.  Hence the mangy look they're sporting this week.  But it's shedding quickly, so I'm guessing they'll be back to their sleek selves and ready for bikini season very shortly. 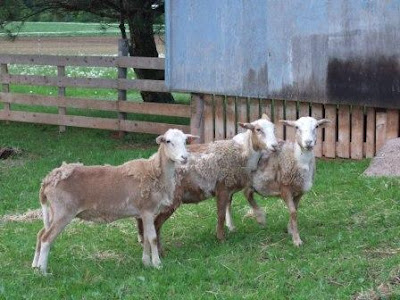 I still can't quite get used to the look of them, after years of facing purebred polled dorsets everyday, but I am slowly beginning to enjoy each of them for their own character (which is hard to do with a flock full of lookalikes in the dorsets-except for a few of my faves of course).  They are still skittish, but once we put them in with the rest of the flock this week I'm counting on them relaxing a bit.  I may still part with a couple of them because Barnyard Organics is finally getting its cow!!  That's right. Any day now we will get ourselves down to eastern PEI and pick up Daisy or Buttercup or Bessie or Rosie or whatever we decide to call our new Jersey.  We were down to meet her last weekend and she's friendly and apparently used to being milked by hand.  The current owners are not sure of her pregnancy status, so I guess that is our risk, but she has been with calf before, so we know she's capable of it.  Anyway, the trade hasn't been finalized, but I think sheep are the bargaining tool, so we'll see.  I will have an easier time parting with a couple of the new arrivals rather than any of my old girls, but in this short time I've already got my favorite hair sheep as well, so we'll see what happens.
Oh hippies trading silly livestock.  My dad has been explicit in his warnings about our getting a cow and although Mark's dad hasn't been as outspoken, his face sometimes gives away his thoughts.  Anyway, it's just another experiment on the farm of life around here, so if it doesn't work out maybe I'll trade a jersey for more sheep...who knows!?  I ordered three books about milk cows and have been plowing through them in record time to prepare. So we'll see if the theory that farmers can't be made by reading books is legit. I hope for the sake of agriculture that it's not, since that is probably the fastest growing sector of young farmers in the country.

Wish us luck and next time I post I hope to have pictures of the new lady on the farm, doe eyes and all!