When it rains, it pours

I grew up in a big old farm house which has managed to withstand the upbringing of my eight siblings and a generation (or two) of others before me.  By the time I came along I had my pick of bedrooms and of course I chose the smallest one.  It's at the front of the house, so gets the best breeze, and Mark will confirm (with frustration) that I do indeed love a good breeze on my face when I sleep, year round.
Anyway, since there was only me and my parents, we had a few extra bedrooms and from time to time, there were some interesting visitors who filled one or two of them.  My mom has been heavily involved with the mission side of the Presbyterian church so we often had missionaries who were travelling around telling about their missions, staying for a day or two. Or we hosted youth from time to time, who were travelling around through the church or school exchanges.  Then, annually, we hosted the shearer.
I never realized, until I had my own house, that an over-night house guest is not as easy as my mother made it look.  I guess to her, at that point, it was just another body in the house, after putting up with 8 'jeezers' at once, no big deal.  Anyway, he would land in, from PEI, spend two or three days, using our house as the hub to finish shearing the sheep in the area, then off he'd go again.
I vaguely remember before there was a 'shearer' and Dad would 'go at it' and then be in fine form for days after, while his back recovered.  He LOVES to quote Stompin' Toms song about the tobacco picking, except he fills in shearing sheep, "my back still aches when I hear that word."  Anyway, since I've never had to do it, I think I've always taken the shearing of the sheep for granted.
And then every year, the hot weather comes and my heavy laden ladies are laid out in the breeziest shade they can find, panting for all they are worth and the guilt strikes me that I haven't called the shearer yet.  At this point, I'm sort of 'on his list', and I don't really need to call, but I always get nervous that he'll forget or pass me over.
So when I started my annual track-down calling, I was shocked to get him on my second try.  That's never happened before!  And his chatty way he said that his shearing partner, Pauline (who did my sheep the last two years) had just arrived from out west and they were heading up 'our way' this week.  Whew! But when it comes to Val, I've learned that 'next week' can pretty quickly turn to two weeks, or next month, pretty quickly.  So when he wouldn't nail down a day, I was relieved to hear I was on the list, but hoping the hot days would hold off a bit longer, for the sake of my girls.
Then the rain came. It's hard to show rain in pictures, but you can see how little we can see across the road because it's pouring so hard.  The rain is bouncing off the driveway and the puddles are foaming. 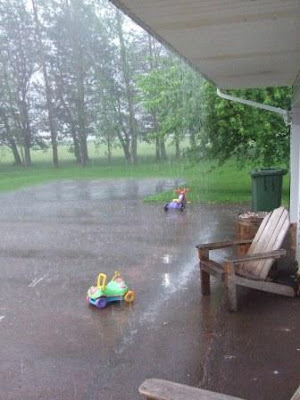 We knew it was coming.  Mark talked about it all last week. "Sunday's going to rain."  We even briefly talked about shutting the sheep in.  I said, "if it's just showers, it'll be fine.  The sheep come in out of showers anyway.  The barn is too small for them all with their fleeces on. What am I going to do, jam them all in there for days until the rain stops?  Didn't you say Monday is supposed to rain too? Who KNOWS when the shearer will ACTUally show up!?"
Sunday came, and it showered a bit throughout the day.  I decidedly put it out of my head.  Then supper came, and it began to pour.  It was relentless and pounding.  I began to mumble to myself about the sheep and Mark gave me sideways glance as if to say, "I think I brought this up before..."
Suddenly, in a fit of anxiety I begged Mark to go over and shut them in.  I exclained, "I just keep having this vision of the shearer showing up, taking a look at damp wool and saying, 'I'll be back around this way in Septemeber' You've GOT to shut them in for me! Pleasee!!" 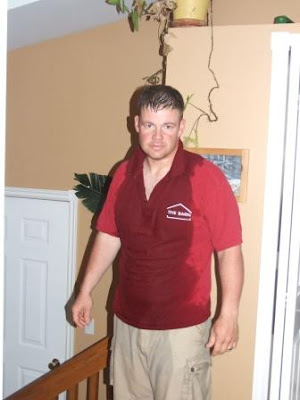 And because I married the kind of man who does this sort of thing, he quietly got up and went over at the height of the pounding rain, thunder and lightning, and put a gate up at the door so that the sheep would stay dry (or not get any wetter at least).  Just look at those eyes, don't they just say, "Love you sweetie" or maybe it's "I love sheep."  :)

Anyway, as I write this, the rain continues to pour and Mark is speculating what his new Fathers-Day-Rain-Gauge will say in the morning.  The soil certainly needed it, although the intensity will no doubt leave some places (with more hills and less organic matter than ours) a bit washed out.  Yes, that's a bit smug on my part. Just for that, there will probably be a big rill running through one of our freshly seeded soybean fields come tomorrow.  Karma.

Hope this finds you dry and celebrating fatherhood!