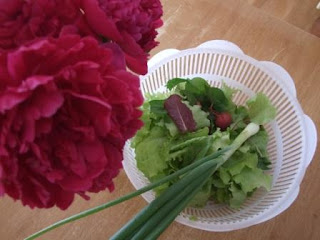 TA DA!  Our first harvest from the garden!   I managed to scavenge together enough leaf lettuce, spinach and baby beet greens to make a salad, while Lucy pulled a few radishes and a green onion for me.  Made for a pretty delicious little treat.  Too bad, it's gotten so warm that all the spinach has bolted and the greens have come to a bit of a stop. I think I remember now that my plan was to plant some lettuce every week at the beginning, but I can see now, that I forgot that plan.  Too bad. :( It was good while it lasted!!! haha  Also those are my first peonies in the foreground.  I planted a peony root when I moved here and finally, this year I had some big beautiful blooms.  One of my favorite flowers for sure. 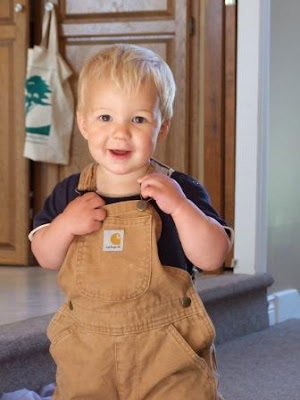 I got these little Carhartt overalls in the mail from a friend when I was pregnant with Lucy and at the time, they seemed so huge, but they're making their way through the second kid at this point and it seems like not very long ago I remember unwrapping them! 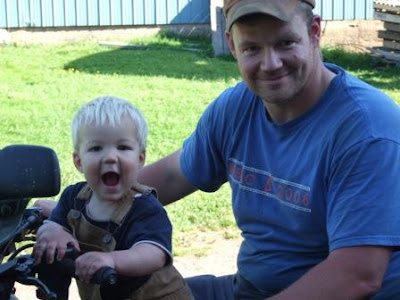 Everyday I think Wilson looks more and more like his Dad.  Here's the two of them carting around on the 4-wheeler, on their way to go feed the pastured chickens. 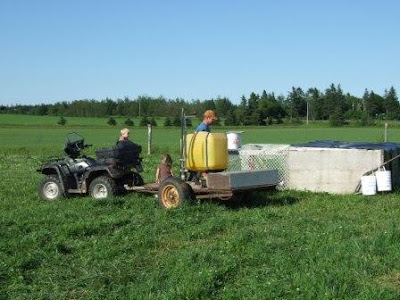 Here's the crew arriving at the chicken tractors, ready to move, feed and water the happy little birds. 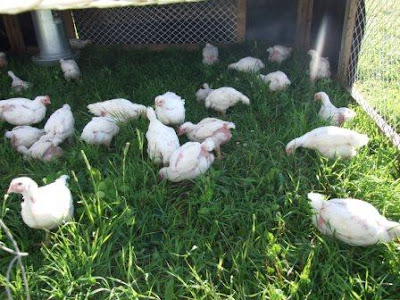 When we chat with our conventional farmer friends about the chickens, I get the impression that they think having chickens out on pasture is more of a marketing ploy than anything legitimate to do with the quality of life for the birds.  When we tell them how much they love to eat the clover and the grass they say, "oh yeah...", in a sort of polite 'yeah right' kind of way.  It's hard to show in a picture, but these chickens have just been moved and you can really hear and see them picking the grass as fast as they can.  They go for the clover first and then pick away at the rest.  It's really amazing to see what kind of diet chickens would have, given the opportunity. 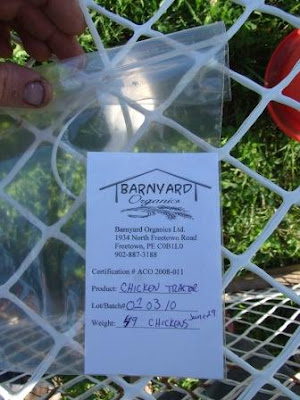 Mark likes numbers and records.  That's part of why he's such a good organic farmer.  He's attached these tags to each of the chicken tractors now indicating what date they went out, the tractor number, how many birds, etc. etc.  We keep track of deaths or illnesses on our computer, but he took it a step further with these fancy tags  this year. 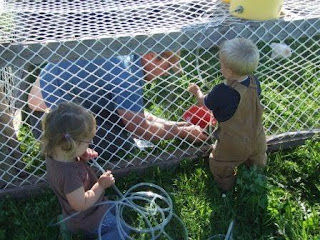 Although we've got the chicken tractors down to a bit of a science at this point, they do still have their faults.  One of them is accessibility of the waterers.  If the float isn't set right, then the water runs over and they run out of water.  To get to it, Mark has to crawl in, work in a very confined space and hope that the chickens don't leave too slick of a poopy trail for him to get back out.  It doesn't seem to matter if he crawls in RIGHT after we move them, they manage to poop exactly in the spots he crawls within seconds. This is a shot of the two helpers, assisting the big chicken in the pen.  How much he appreciates me and my photo taking in moments like this, he keeps to himself.  :) 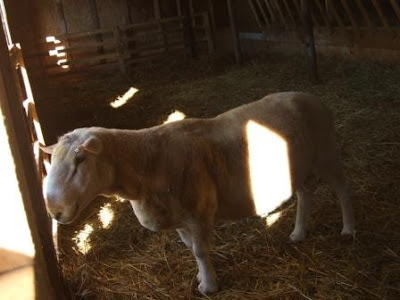 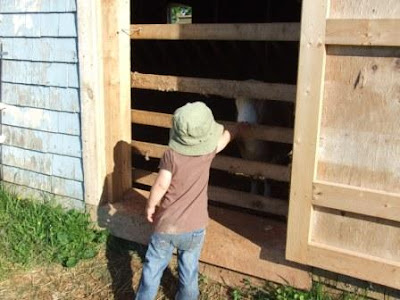 Here's our latest addition; well temporary addition.  I've borrowed Duncan the North Country Cheviot Ram from my mom to breed the ewes who didn't catch last season. He is friendly and big and the kids LOVE him. 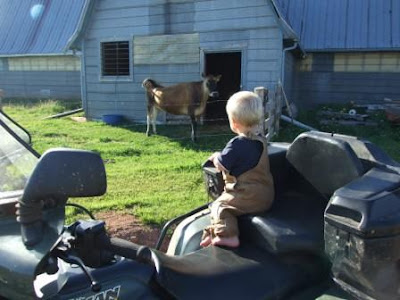 Rosie continues to flourish and is doing well.  Here's Wilson, foreman of the operation, checking her out. 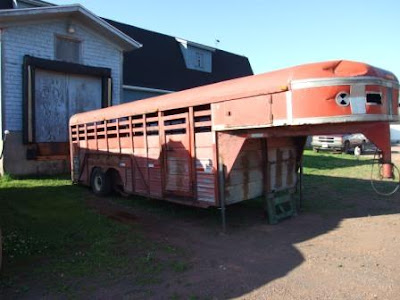 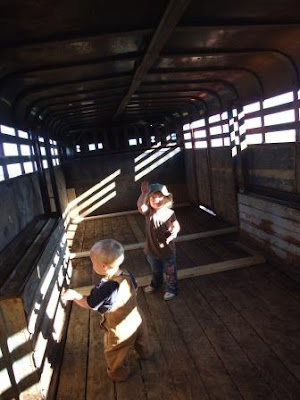 Another new addition, we recently picked up this old cattle trailer to act as our new barn.  We need more pasture and have been considering a way to put the sheep out on some of our cropped fields later in the season, but keep them safe from coyotes.  The plan is to put temporary fencing out from this trailer and move it every few days to new ground, but be able to shut the sheep in at night.  We'll see. I'm nervous about coyotes during the day and am considering a llama.  Again, we'll see. 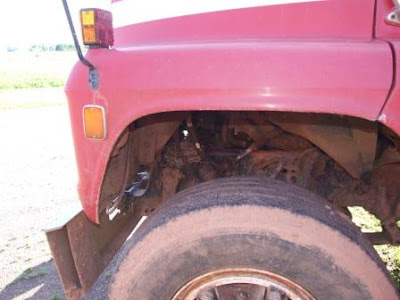 If Lucy takes you on a tour of the farm, I can guarantee it will go like this:
1.Go see the 'beebee chicks'.  Pet one and scare the rest to pieces while you corner them.
2.Go see the "big FAT chickies". These are the ones in the pasture and apparently this is how they are distinguished from the hens and the new 'beebee' chicks. Emphasize and repeat the word 'fat' until spit flies out your mouth.
3.Since they're in the pasture, it's inevitable that you will also see the sheep.  No big deal at this point.
4.DUNCAN!!!! Let him lick your fingers and giggle a lot.
5. Rosie! Get UP and come see us!!  Scratch her ears and say yuck when her wet nose gets on your arm.
6. Walk by the dump truck and stick your head up inside near the front driver's side tire. Avoid the poop on the tire, the mud on the surrounding parts of the truck,  and ignore the smell of rotten seafood and you will notice a nest tucked into the corner.  Inside you will find... 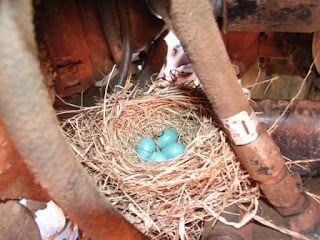 ...four bright blue robin's eggs!!  We have no idea when the robin decided to build the nest, but she must have been fast, because with the mussel shells, Mark was taking the truck for drives at least once a week for the past months.  He noticed the nest about a month ago and it's sat there as snug as can be for a number of rough trips ever since.  Clearly, that bird knew what she was doing...in the sense of a secure nest.  Not so much in the "great place to raise kids" sense.

Thanks for coming along on that little tour!  Things continue to truck along nicely here at the farm.  Mark has begun to cultivate the soybeans- the slowest and most painstaking job on the farm by far.  Watching the weather forecast carefully, it seemed all clear to cut hay this week, but alas, this morning the forecast did a 360 and is now calling for shower tonight and potentially more over the next few days.  So it's tedded (sp?) out and we're hoping for the best.  It's almost a guarantee around here that if we cut hay, it will rain in the next couple of days.  Like when all the cows are laying down in the fields at once, or when the lawn is covered with dew-laden spider webs in the morning.  It's just a given, a sign.  So if you're wondering, you can rest assured that over the next couple of weeks, we will be getting showers every three days or so.  Not a lot. Just enough to put a damper on quality hay making.

Hope this finds you celebrating a patriotic Canada Day and doing a sun dance to keep the rain away...for a few days at least!