Cream of the Crops! Since I spent so much of last entry proclaiming that we're a grain farm first, it seemed only fitting that I should include some pictures of what we actually make money at (most of the time anyway).
Things are pretty smug around here right now.  This has been a fantastic growing season thus far and the crops are looking amazing.  As you can see from these freshly cultivated beans, the growth is green and lush, and the weeds are few and far between; just like we like it.  That's the fruit of Mark's well planned and diligent, long-term management labour. 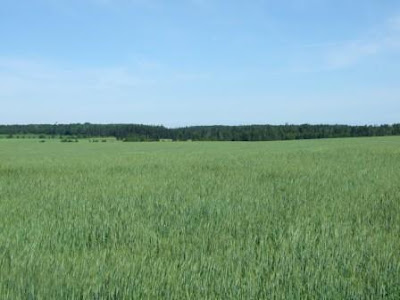 Here's a couple shots of our wheat fields, which are really outstanding right now. I like to say they're like conventional only better, because we don't have any lodging.  Lodging often occurs this time of year with heavy rains or strong winds and is basically large sections of the grain breaking and falling over.  Research has shown (and common sense says) that too much fertilizer can cause the plants to grow too tall too fast and the stems cannot support the heavy head of grain.  Now that I've put it in black and white, you can be sure that the rain forecasted for tonight will flatten entire fields by morning.  haha.  That's the fruit of Sally's home made smugness at work. 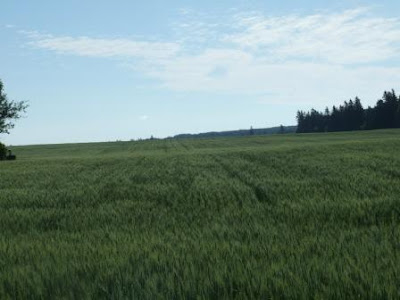 I tried to get a shot of the patterns in this wheat field, but I think I need a plane rather than a large mini-van.  On the edge of this field of AC Helena variety wheat, we have a strip of Acadia, a rare, heritage variety grown for flour.  Speerville Mills, in NB works with organic wheat and is always interested in heritage varieties.  They had about 20kg of Acadia in their freezer and we thought it would be an interesting opportunity to grow it out.  So far it looks good, we'll see what the rest of the season brings.
Another colour of wheat is a strip beside the Acadia called Red Fife, which is growing in popularity, but is also a heritage variety for flour.  Speerville really loves working with Red Fife and we thought we have had a couple years of experience with growing wheat, we could try it out.  The thing with heritage varieties and Red Fife in particular is that it takes a few growing seasons for it to adapt perfectly to our climate, soil, etc.  It's so amazing that certain, old varieties have the ability to adapt like that, where new varieties have been bred to do the exact opposite and be exactly the same in every field no matter what the conditions.  Consistency has it's place, don't get me wrong, but there is something more to be said for staying power.

In other field crop news, we're done hay!!! The loft is full, the back sheep barn is full and we've got 36 round bales for back up.  Rosie is an unknown element in predicting our needs this year, but that's more than we've ever had before. So when it comes to rain forecasts now we can sit back and say, "Let 'er come!"

Anyway, in other news, my garden is getting ahead of me, both in terms of harvest and in weeds.  I had a few bare sections that I intended to see out with oats or buckwheat, but as usual didn't get around to.  Those are now producing a beautiful crop of lamb's quarters and red root pigweed.  It's hard to get motivated to weed those sections as there is nothing in the undergrowth to save, but I know I will regret it if I don't get rid of them soon, before they set seed.
We had a great supper of Three Pillar Farms pork, todays home made bread and FRESH green beans from the garden. Last night we had our first potatoes and I don't know what it is, but it doesn't matter how many store bought new potatoes I have, there is NOTHING like those first new potatoes from your own garden.  Biting through that thin skin, while the butter melts down your fork and down your wrist and the whole thing just melts in your mouth.  New potatoes are my absolute favorite food.  Even more than chocolate.  Because I can have chocolate any old time of the year. At least some things are still sacred.  We can buy asparagus in February and strawberries at Christmas, but the new potato...now THAT is a treat.

Once again, I'm off to hit the sack as they say.  So much to fill these beautiful July days.

Hope this finds you happily exhausted and sun kissed as well.