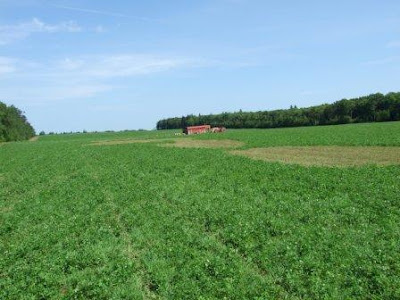 We are a grain farm first.  Before there were sheep or chickens or babies or me, there was grain.  Despite the arrival of those aforementioned things, and despite the preference to focus on livestock in this blog, this is a grain farm first.  So each year as my flock expands, I worry about losing valuable crop land in favor of pasture, but recognize the importance of having enough pasture to do sufficient rotations, organically.  And while the sheep are not necessarily a money-losing venture, they are not necessarily a HUGE money generator and they require a lot of work.
I often find myself pondering the existence of my flock because despite my love of sheep and despite the importance of having livestock on a farm, they do take up a lot of space, time and resources that could otherwise be dedicated to what we actually do; GRAIN.  The thing that keeps me coming back is that I loved growing up with sheep and I want to give my kids that same opportunity.  I also think that it is infinitely important that kids understand the concept of life and death from a very young age, and there's no better way than to see a lamb being born and the odd one die.  Puts the small things into perspective pretty quickly and is something I feel like a lot of kids are missing out on.

ANYway, the point of this entry is to talk about my attempt at working the sheep into our crop land, rather than removing crop land into pasture.  Half of the ladies are out with the ram right now and the lambs are separated, on a feeding schedule to encourage the last bit of growth (although Mark weighed them today and already many are at or past market weight! That's a record for us!)  So I just had half of my old ewes to contend with and I didn't want to risk the ram breeding them (however unlikely since they just lambed in Feb.) and wanted them separated.
The plan was to put our old dilapidated cattle trailer out in the field, run some electranet and let the sheep graze the hay land that had first cut silage taken off of it (or whatever field was looking best.)  I thought that it would be great to capitalize on all the acreage we have post harvest, and the acres of legumes we plant for our 5 year rotation.
Great in theory.
Three major problems ( from my perspective) 'cropped' up right away.
1) mosquitos.  This sounds trivial, but one of the first nights we went back to shut them in the trailer for the night, when I reached into the trailer to shut off the fencer, I thought I was reaching through a curtain of some kind, but when I looked it was just mosquitos.  They sounded like a 737 coming in for landing.  It was the craziest thing I've ever seen.  And shutting 12 sheep into a trailer with that many mosquitos seems like the ultimate torture to me.
2) bedding.  We didn't anticipate as much manure in the trailer as there is. They're only in there overnight, but wowzers...they require fresh straw almost daily, which is just more man hours ticked off on their value.
3) and this is the biggest problem of all; sheep eat a lot.  We had anticipated moving the trailer every few days, but it turns out that 12 sheep can eat a LOT of clover in a very short amount of time.  In half a day in fact.  So much so that if you don't move the fence halfway through the day, they will get out when you try to move it that night.  Then you have loose sheep, manure AND mosquitos to deal with.  Oh, and a tangled fence.  And it's dark.  And did I mention mosquitos? 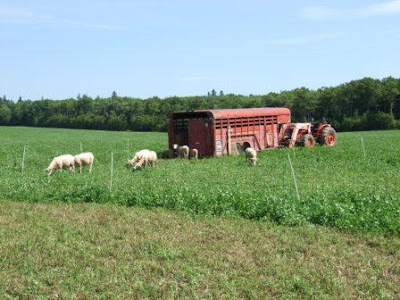 So needless to say, after about a week of it, we've agreed that it isn't working like we hoped and we're onto new ideas.  Perhaps Rosie needs some company in her lush pasture?  At this point what we have to show for our 'big idea' is an un-road worthy cattle trailer and a bunch of  sheep-created crop circles in our field and some dirty looking ewes who are eager to explore their horizons once the grass runs out.  We're open to suggestions. 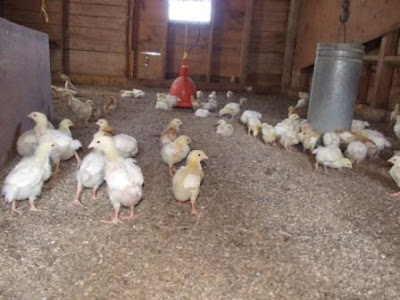 In other news, our third batch of chickens has arrived and the second batch (above) is almost ready to go out into the pasture.  The first batch is looking great and our first ship date is August 4th.  So at least some of the livestock are going as planned.  Whew.

Speaking of the arrival of third batches, we have some exciting personal news to share, which is that we're growing the work crew here at Barnyard Organics by another wee one come mid-January.  Can't wait!

Hope this finds you celebrating the arrival of sun (and heat), but enjoying the days of rain as well.