I just spent the weekend at the NSAC taking the third module of the Modern Shepherd course and if I had the energy, I would write a harsh and extremely critical overview of the program thus far, but there is one module left and I'll wait until I decide if I'm going to bother with it or not before I expend any brain cells on it (which I think I'm short on after this weekend).  Spending time with my Mama though was a nice treat and sleeping in a clean, very white, very comfy hotel bed all to myself is probably worth the annoyance of the occasional bad speaker.
No, tonight my annoyance, and confusion is aimed at something else entirely.
(disclaimer: this is no reflection of my personal situation, just a commentary on the plight of the D.I.L. scapegoats across the country).
The Country Guide is a magazine that always circulated around the house growing up and seems to have been one of those magazines that every farm family has sitting on top of something somewhere in the house.  I don't remember reading it growing up, like I did with the Rural Delivery or the old Harrowsmiths,  but since I've started to actually pay attention to farming it has become a really interesting read for me.  So much information regarding all kinds of farming operations and businesses and so many perspectives (although maybe often erring on the side of large, conventional-encouraged I'm sure by the astounding amount of ads/$$ from chemical companies) and things I don't often think about.
So when it arrived this month and I had read the first couple articles that caught my eye I noticed an advertisement for an "informative video series" hosted by Dr. John Fast (who also happens to be a speaker at an upcoming event that Mark and I are attending).  I read his quick bio and quickly glanced at the short list of 'upcoming video topics'.  The first one is called:
"How to Fix the Daughter In-Law"

I thought, haha, this is a great joke topic.  I wonder what it's really about.  Well here's the short description:
"Please fix our daughter-in-law!" According to Dr. John Fast this is a very common complaint in farm businesses and a most convenient person to blame when things are not going well."

....umm....WHAT!?
I read it to Mark who smirked and made some comment, thinking I was worked up about them targeting women or something until I screeched,
"I'M A DAUGHTER-IN-LAW!"  He looked at me as if this had never occured to him before.

Now maybe it's because in the Wilson family, Mom has always made it pretty clear that her boys were damn lucky to marry the women they did and that if something went wrong, they had only themselves to blame.  Or maybe it's because Mark is the only boy and (dare I say it?) a bit of a mama's boy who can (mostly) do no wrong (eeeep!)(my own mother included!), but this has really hit a chord with me.

Of course I can't get the actual video to play, but that doesn't really matter because I'm pretty sure that I know the gist of what will be said and I have no doubt as to it's relevance and importance. Even when the speaker will inevitably say that it's deeper than that, that there's other, real sources of the problem, is it truly a 'very common complaint when things are not going well"!?!  Is it REALLY that common of a complaint?!  Is there not a better way to describe this topic!?

No, maybe not.  Maybe that's the polite version.  A more forward, or blunt version might call it "Gold Digger" or "Son Stealer" or "Nightmare from Away" or "City Slicker Horse Lover Come To Ruin the Farm".
Perhaps a line of videos for the daughter-in-laws across the country called "BabyHouse:How to Have Those Grandkids Quick to Save Your Place on the Farm!" would prove popular for the other side?
Ok, but in all seriousness, I can't wait for the video to load so that one day I'll be ready to handle whichever pesky girl Thayne may bring home.  The nerve.
And good luck to all the female farmers out there.  With no video to help the daughter's parents of those dreaded son-in-laws, they're doomed, forced to watch all the problems that come with those guys on the farm.  Maybe I'll make that video.  Wouldn't THAT be educational.  Best seller.

Ok, when that comes out, I'll let you know.  In the meantime, here's a quick photo update of the kids and their goings on. 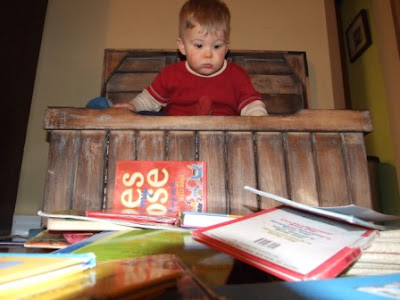 Thayne is at the fun stage of emptying, throwing, removing, clearing, destroying and repeating all of the above.  I love this shot of him admiring his handiwork after partially emptying the book box.  ﻿ 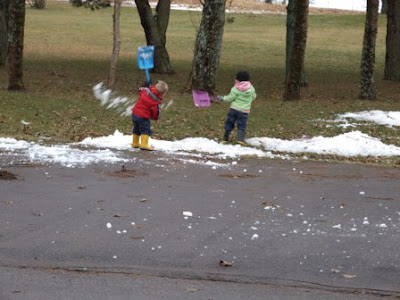 It is so true that the simplest gifts are often the best and these two shovels the kids got for Christmas have lived up to that.  Although our snow is fleeting this winter, when it comes, it provides some GREAT entertainment.  As you can see here, they are mastering the art of throwing snow at the other one whilst making it look like an accident.  Thankfully they have also mastered the "don't come crying to me unless there's blood or bones" and have learned to either get out of the way or retaliate. 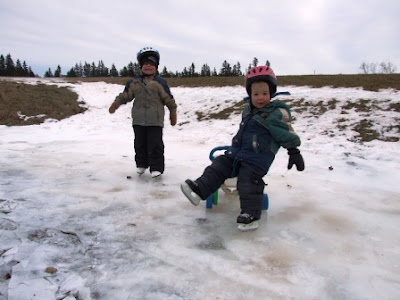 I got a great response for readers when I posted a picture a couple summers ago of the kids playing in what I called their 'hillbilly swimming pool' which was just a large mud puddle beside the barn (and I mean MUD).  Once again, I'm happy to bring to you the joys that a puddle can bring to wee ones.  The culvert at our lane has fairly terrible drainage and when it was full of water this winter, it froze and made a PERFECT little 3'x7' skating rink.  They got the skates strapped on and 'hit the ice' as they say.  It was just the right kind of day and because it was so tiny everyone felt like they were doing fantastic when they got from end to the other.  The other bonus to a puddle rink is that there is usually some good shell ice around the edge for snacking on when things get 'down'. Plus, the excitement of having an 'audience' (albeit a drive-by one) was pretty invigorating and often resulted in great tumbles as Lucy would prepare a grand stride or 'twirl' for the benefit of the drivers (who I'm sure mostly didn't even see us in the ditch) and wipe out almost every time.  To her credit though, she got cold before she lost her temper and gave up, which is a giant leap for us. 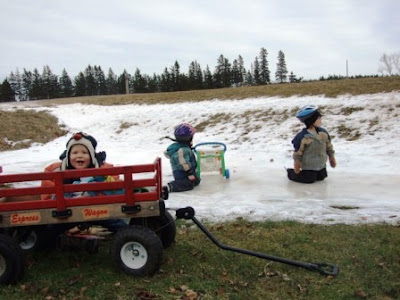 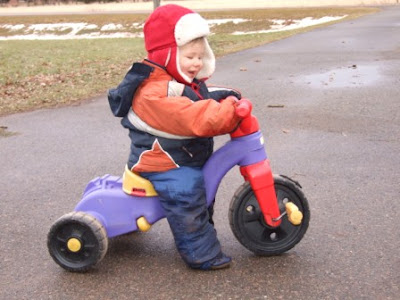 Thayne has been enjoying the outdoors a lot more without the snow too.  He's getting around pretty good and is content to crawl around without me carrying him, so life has gotten much easier that way.  Now I can boot THREE kids outside while I compose a blog entry (haha-just joking. I check Facebook instead. haha!)
And speaking of my little guy, he celebrated his big 0-1 last weekend!  He was pretty overtired by suppertime and fed up with all the excitement (balloons and streamers can really wear a guy out) so his expression is less than enthusiastic. 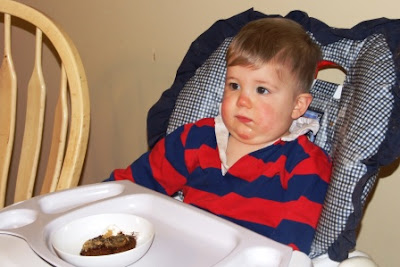 But I know that deep down he appreciated that cake and ice cream. 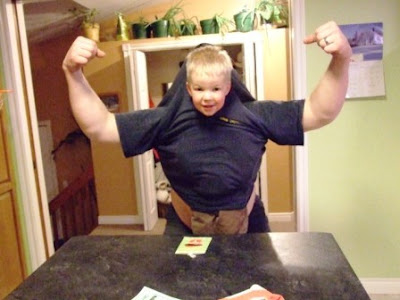 Mark loves this picture and I have to admit it's pretty funny.  Someone has been eating his spinach. :)

The farm is plugging away.  All critters are well and Rosie's belly continues to expand.  We're learning more about BioAg and are really confident in the superiority of the products.  There is so much to learn and we're enjoying all the new education.
The latest company newsletter mentioned a stat from a study of conventional dairy animals and how 21% first time conception rate is now considered excellent.  That means that if 21% of cows who are bred after one exposure to bull or semen actually catch and become pregnant, it's considered a great rate of success. 21%!???!!! Aren't most of those cows being brought into heat artificially anyway!?  I can't help but think of that study I referenced with the mice fed the high GMO diet whose rates of conception fell with each generation until after four generations they couldn't conceive at all.  We're only 2 1/2 generations in.

Anyway, here's to continued education and the simple things in life.