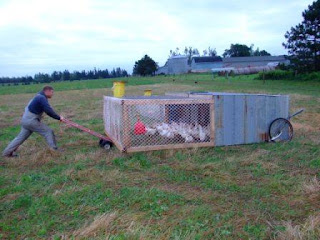 Things are hoppin around here, although my duties seemed to have slackened to almost nothing, on the farm at least. Bronson, our new worker has taken over all the ‘little jobs’ that I used to be in charge of and the kids seem to be on a schedule which makes it hard for me to get out of the house to do the morning chores like I used to (those two things together, make it quite convenient however). Mark and I have always done the chickens in the morning together, because we enjoy it, but also because it is sort of a two person job. Moving the chicken tractors is possible with one person, but it’s always helpful to have an extra set of eyes keeping watch on any spare parts that might be slow to keep up, and an extra set of feet to kick the sides to wake up the sleepy birds who aren’t ready to move yet. Also, I think I tend to take a closer look at the actual state of the individual creatures, where Mark is more group-minded. This fact alone is probably a big part of the reason that Mark doesn’t seem upset that I’m no longer as available as I used to be. (When I go up to the chickens in the pasture, I tend to come back down with one in arms for the ‘hospital’, which is really just the brooding house where I can tuck a tired looking one away for the day, under the heat lamps with easier access to water and feed. Mark rarely thinks this is necessary – and it probably isn’t most of the time – but together we make a good team. 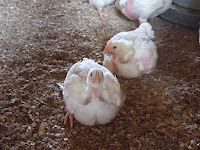 Anyway, things are going well. We cut hay today, FINALLY! It should have been done a week ago here, but the weather has been strange and terrible. It’s still cold, but there’s a lovely breeze and some sun, so, so far things are looking good. Oddly enough there’s a call for frost here on the island tonite. A first apparently, frost in July. I think everything is probably fairly safe, but we’ll see come morning I guess.

Mark also started cultivating the soybeans today, which is probably my least favorite job on the farm. Technically it shouldn’t be that bad, sitting in an air conditioned (or heated if need be, like today!) tractor cab travelling slowly over level ground, listening to whatever you choose on the radio, at an even pace. However, after about half an hour my brain is mush and my patience shot. The rows are 18 inches apart and the tractor tires are nearly 15 inches wide. The cultivator is set to clear out as many weeds as possible, which means that there is NO room for error. It takes the first hour or two to accept that 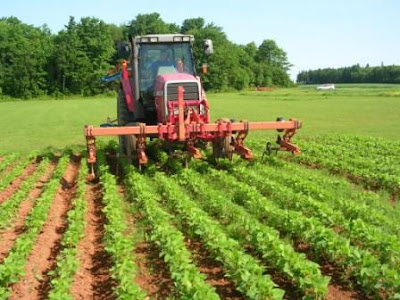 losing plants here and there is inevitable, but because of our lack of a row marker on the seeder, we lose more than we should. Without the row marker it’s easy and likely that you’ll put the outside rows too close to the next row (make sense??), which means when you’re going through with the cultivator, you take out one of those entire rows. ‘Tain’t pretty when you’re in the cab watching the little plants get sliced off.

Anyway, another lesson learned (again) for next year. Besides that, I think it went well. The beans always look so pretty and tidy after cultivation, so in that sense it’s a really satisfying job. Just not one for me.