It all started a few years ago in the kitchen of our old place in the other half of Mark's parents place. We were having friends over, discussing a farm name because the old name, Bernard and Profitt Farm didn't really fit anymore. For one thing, we no long had a partnership with the Profitts, and the farm had moved from being a conventional potato farm to the organic grain farm it is now. So we felt a change was needed, just not sure what. We wanted to keep it associated with the Bernard name, but were having a hard time picking something we liked. Since Mark's nickname at NSAC was Barnyard that seemed pretty fitting. quaint and funny (to us at least-and to some of the friends who were helping us pick a new name since they were old rugby guys from AC).
So once we chose the name it was time to choose a logo. My good friend Lanna (that's an old link btw) doodled the picture you see above on an old piece of scrap paper and the logo was born!

The other day we erected the sign seen below and now this is what you will see greeting you at the entrance to the farm! The smaller print that you can't see in this picture says, "Producing certified organic livestock, grains and oilseeds since 2006." Technically we've been growing organic since 2003, but that's the first year we actually produced a certified product. 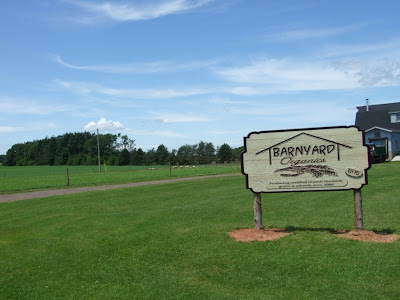 We got the sign from Colours in Summerside and I'd like to take this opportunity to say that I would never use their business again. We were extremely disappointed in the service and the quality in the end, for what we paid for the sign. Thankfully the PEI Dept. of Ag has a great campaign on right now for marketing costs for farms and businesses to promote the Buy PEI initiative, so they covered half the cost of the sign. However, that doesn't negate the fact that the quality was not what we expected or were told we were getting. So I would advise you to go elsewhere for your sign needs. Fortunately, it looks like what we asked for, so I guess that is the most important thing.

Finally the sun is showing its face here today and the forecast sounds promising! Yay! The sheep are HOT, but surely the shearer will be making an appearance someday soon... My rams are fattening up nicely. As you can see in the background of the sign, they've moved to thier new pasture and are pretty content I'd say. Mark weighed them as he moved them and although the size varies, there seems to be two groups of similar weights, the first anywhere from 70-80 lbs. so they will be ready to ship soon, the second group is smaller ranging from 35-60 lbs, so will be ready hopefully by September, Octoberish? I'm sure there'll be the usual stragglers (that 35 pounder probably) who hold out getting to the 80lbs until Christmas. Argh. Anyway, currently, all is well.

All the chickens are doing very well. We've now got the third batch here on the farm and so far so good. We've lost a few out on the pasture from unknown causes, but not many, so we're happy. We're moving the pens twice a day now and I think it makes a difference, where last year we only moved them in the morning. More foraging means less feed...we hope. The first batch will be ready to eat on the 12th. That's our first slaughter date and they should range anywhere from 6-10 lbs. So get your orders in soon!! We're considering borrowing a truck bed cooler unit and hitting up a couple markets if we need to. Have never done it before, but it might be an interesting way to get some new customers. 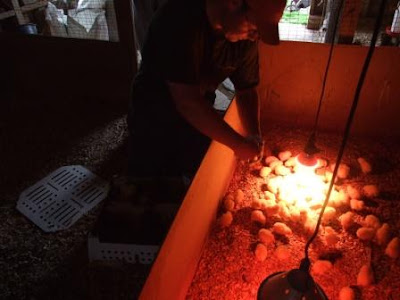 Here is Mark unloading the latest batch of birds. They scramble for the warm light and then start drinking water like its going out of style. Finally, they start pecking at the feed and on that first day they sure make up for lost time in the eating department. We were a little unsure of what to do with the layer hens we had gotten with the first batch on the 26th of May. By now they're much bigger than the new babies, but not quite big enough to go with the old laying hens who run outside all day. We left them with the little chicks for the first day until Mark found them in under the light, picking at the chicks. One guy had some especially serious bullying marks, but has recovered so well we can't even tell which one he is anymore. SO, Mark managed to scoop all the layer hens out and threw them in with the old ladies and bid them good luck. They're working out a 'pecking order' (literally) as such, although they new ones are definitely at the bottom of the ladder. They're too scared to go outside so they spend the moments of the day when the old ladies are outside, filling up on feed and water that the old girls won't let them near if they're inside too. I saw them up on the roosts this morning though, so things must be coming along. This is a picture of Wilson watching his dad unload the chicks, with the laying hens in the background, while they still lived in the brooder house. Not anymore. 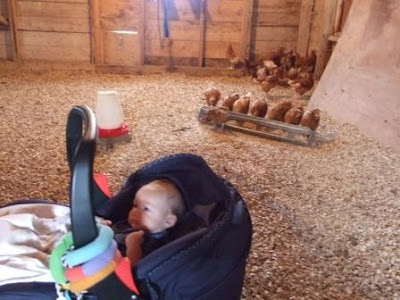