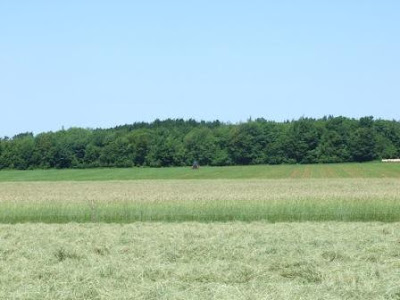 Here you can see the hay teaded(??) out, ready for raking and baling, with the fall rye behind that, and then Wendell cultivating the beans behind that. Sadly it's too small to really see the big difference that cultivating makes.
Wendell has taken over since we started haying and he is a trooper, staring for hours at a time out the window at the little rows, travelling at a literal crawl. Don’t know where we’d be without him.This is a shot of the hay we harvested from the pasture, with the sheep and chicken tractors in the background.

Got the first load of hay up last night and it’s beautiful stuff. The sheep won’t know what hit them after the poor stuff we’d been feeding them this spring. The second load went in this morning so we’ve got the back of the sheep barn full, the side of the ram pen full and have moved up to the big loft above the main shop. It’s a lot easier to store it up there, since we have an escalator now. Only takes two, which means I don’t have to get Carol to babysit while I help out. Bronson and Mark can handle it just fine. Mark and I have the infrequent discussion about the merits of stacking the hay in the ‘loft’ versus just tossing it in the corner. If you know us, you’ll know which of us agrees with which method. We also have the discussion of the proper terminology for ‘the place where you put the hay’. As you can see I’ve adopted the terminology of my surroundings by using ‘Loft’, but where I come from it’s a ‘mow’. What do you call it?

I also wanted to include a few photos of my parents’ 50th Anniversary Party which was a huge hit. We all had a ball and made many memories. There were TONS of people (approx 500?) and somehow my siblings and I managed to guess at enough food, drink and room for everyone. The weather cooperated and the tent worked out perfectly. It all went so well I think it should be held more often than every 10 years!! 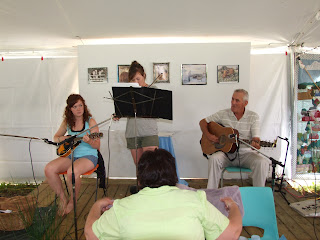 Here's a picture of my dad playing some tunes with Carolyn and Abby (my nieces, his granddaughters) for some afternoon entertainment. 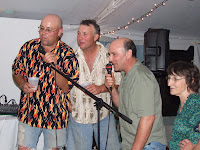 This is a shot of three of my brothers (Bruce, Mark and Grant- he has an identical twin, so that's my best guess, only because I think the other one was wearing a red shirt that night) singing "Mama Tried" with my mom, karaoke style. 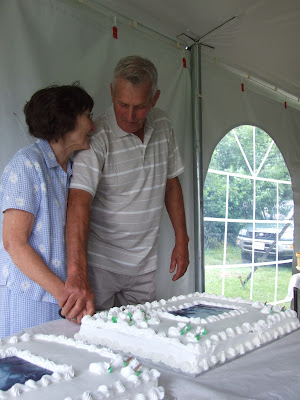 Here's the celebrated couple cutting the cake-sorry I don't have a better one on hand. 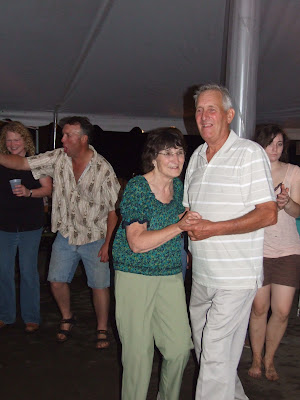 Here they are, dancing the last dance, serenaded especially nicely by a distant cousin of ours(you can see my brother Mark giving some hearty encouragement). How many couples at their 50th wedding anniversary party can say they stayed till the very end and hit the sack at 2:30 am? Good times had by ALL!

As I type this I'm keeping a nose out for the smell of roasting organic, pasture raised chicken to go along with the new potatoes that Mark and Lucy dug out of the garden today. We'll also have some nice salad greens and spinach from the garden as well. I believe this is what could be called a 100 foot diet, and my favorite meal at that! Even the thyme on the chicken is from my herb patch, and the butter that will go on the potatoes is made from PEI milk, so tonight we dine as locavores! WHooohooOO!! 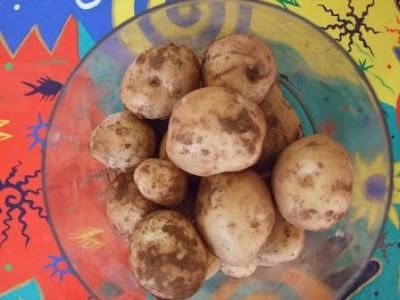 fresh, brand new spuds, care of the garden of the Sally half of Barnyard Organics!
Posted by Sally at 2:07 PM