Shearer, Shearer on the wall, who's the wooliest of them all? 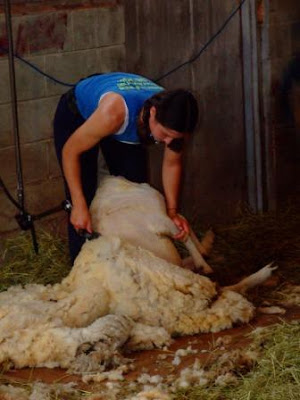 The shearer finally arrived and none too soon. Although we have had a relatively chilly summer, the hot days are hot, so the sheep were more than ready for their annual haircuts. It's a pretty grueling, physically demanding job, which is not above Mark, but involves skill and patience which he doesn't have time for. One of the shearers who stopped by was asking about our chickens and telling a story about how it took him 50 minutes to kill, pluck and clean ONE bird so he figured the killing price at the local abattoir was more than worth it. Mark had just finished saying something very similar about shearing so it was sort of funny.

Anyway, it went pretty well. We got the same girl as last year who is quiet, quick and good at it. Watching her nicely tanned shoulders rippling with muscles as she bent over the struggling ewes I was reminded again at what poor shape I'm in these days. She had my 18 smaller dorset ewes to shear while two other guys went to a neighboring sheep farm to do 35 big suffolk and north country sheep. She beat them by about 15 minutes. It was pretty impressive since there were two of them. At our end of things, Mark's mom has been busy getting ready for family who are visiting so hasn't been able to take the kids and the kids were less than impressed with having to hang around the sheep barn while we sweated, cursed and worked. Lucy was ok with playing in the mud until she crawled up into the stroller and flipped it onto herself. Wilson suddenly developed a severe hate of all things sheep related and spent the first 45 minutes of the event screaming louder than I've ever heard. But the show must go on and I couldn't let the wool get piled up or it would be harder to sort. (Go ahead, call social services..haha). Anyway, grandma and grandpa came to the rescue for the last couple sheep and saved the day.

Last year she advised me that shearing the lambs would make them grow faster, but I decided that my little ewe lambs weren't in any rush to grow and my rams were in a separate barn so the hassle of moving the shearing equipment wasn't worth it, especially when some of them are already nearly to weight. 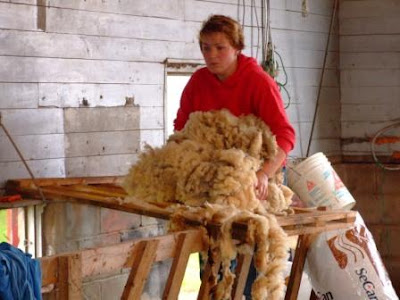 Here's a flattering picture of me sorting the wool (ie. taking the poopy bits off to shoving it into a feed bag).
So I've got 18 fleeces to try to get some money for. The past two years the wool hasn't even covered the cost of the shearing, so it's sort of discouraging. Our organic inspector was here yesterday and suggested because it was organic wool maybe we could get a premium for it, but dorset wool isn't known for its spinning quality (they're more of a meat breed). So I might look into it, but I suspect I'll be sending it up to MacCauslan's in the end. They are the big woolen mill on PEI. Anyone want a blanket made from Barnyard Organics wool? We could get you one for a price. 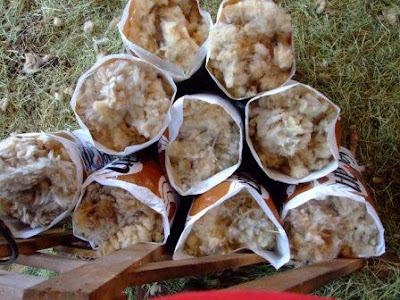 Here's the final (worthless) product.
As I mentioned the inspector was here yesterday and I think it went pretty well. Mark did the inspection part, but I was around for some of the questions and the final summary and it sounded good to me. We've got to put together some kind of slaughter protocol to insure that our slaughter houses (for the chickens and lamb) are using permitted substances or rinsing when they clean. We already ensure a first-in, first-out policy with the meat, but this takes it a bit further to ensure there are no residues from any cleaning agents. For some reason I get nervous asking the butchers to take special measures just for me, but I have to remember that I'm the customer and I'm the one paying for the service. 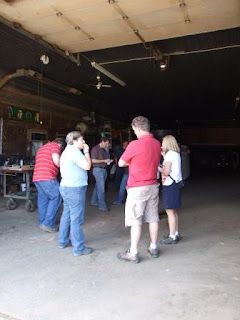 OACC farm tour
I forgot the mention in the last post that we had our first farm tour of the summer a couple weeks ago. It was the annual Organic Agriculture Center of Canada's (see the link the side column) tour of the plots they have here on the farm. There was a pretty good turn out and it was good prep for the larger tour coming this Thursday. The PEI Federation of Agriculture does an annual tour of different farms around the island and this year we are the first stop of the day. I've gone on the tour before and they are usually pretty interesting and well organized. Mark is VERY laid back about it (as he was with the inspection as well...strange for him), so it should be interesting. We'd like to be able to show off our soybean roasting, steeping and flaking operation, but I think they mostly want to see the crops and plots...

Busy week this week with tour prep, my family coming for the weekend and hauling manure. MMmmmm....the sweet smell of nutrients... :) haha

Hope all is well in your corner of the world, 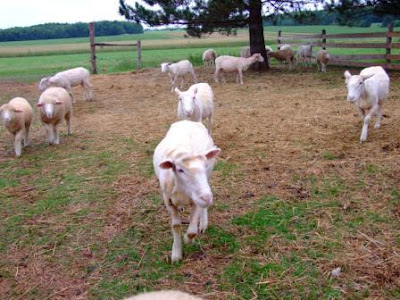 The newly naked sheep in thier corral.
Posted by Sally at 8:06 AM