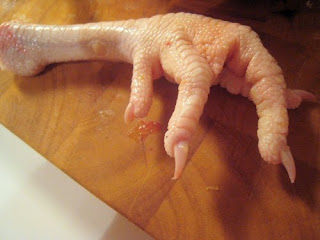 Farm kids and city kids aren't all that different in many ways.  Lots of studies have shown that many kids play the same way, despite their surroundings, but I think it's safe to say that in general, farm kids tend to play with different toys than city kids (or they used to).  What about a good game of dried-up cow patty frisbee?  Or a good round of snaring lamper eels out of the brook (NOT a fav of mine!)?  One of my personal favorite, farm-exclusive toys was the chicken foot.  Chicken killing time is a hilarious time for farm kids in itself; what with headless poultry bouncing around the yard in a wildly hilarious dance routine until they stop and OH! the next one is at it!!! The plucking and cleaning is maybe not quite so fondly remembered, but there was always the fun of the chicken foot.  Find that slippery white tendon that makes the 'fingers' contract, put it up your sleeve and scratch somebody's neck.  That sort of fun never gets old. Until the farm dog continues to drag chicken heads to the front door for a week following killing day, but that's another entry.
In any case, those chickens that I laughed at all those years ago and the chicken feet that I carted around, pulling on tendons, have come back to haunt me.  They've sent avengers and I'm going to go crazy.
I have been planning my master garden. the new creation since tearing up my lawn last fall, and have been working away diligently, waiting the moment when I can drop those seeds into the perfectly prepared soil.  I finally decided that the soil was good enough (far from perfect-but able to sustain plant life at least) and got to planting lately.
It started with my asparagus, then the strawberry plants I got from my sister-in-law, Lisa.  My hens have super hearing and as soon as they hear me even begin to turn some soil- even just to drop a tiny radish seed in the ground, they come running, ready to scratch it out and gobble it up!
I will be shocked if half of my $$ asparagus plants even survive, as that is their favorite area to have a dust bath.  I have just come in from planting my beans, peas, carrots, parsnip, greens, spinach, radish, beets and squash and I know that those little brown demons were watching me from under the hedge into which I'd chased them numerous times and as soon I made it to the doorstep have mangled my entire afternoon's work.
One might think that having 'helpful' two and one year old sous-gardeners would be challenge enough, but I'll take a few kids size 6 rubber boot prints and lose a few fistfuls of topsoil to a hungry toddler anyday, over those damn birds.
Those chicken feet aren't so funny anymore.

Hope this finds you productive and planting!

ps. Dad, I just looked up 'lamper eel' on google to make sure I had the right spelling and nearly had a stroke when the first thing that came up was a picture of the mouth! BLECK!!! Nightmares for sure tonight!  I will NEVER ever forget that friggin moment in the middle of the brook. I wasn't long heading for the hills.
Posted by Sally at 3:12 PM