The Hills are Alive with the Sounds of Baaaas. 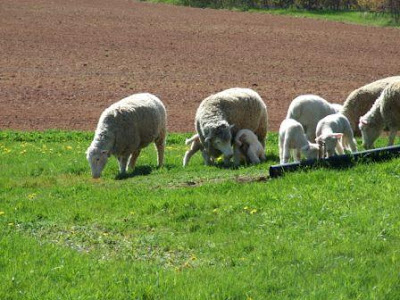 Thanks to my dear little ram lamb last year, I have little babies out on pasture this year.  This is by far, the youngest lambs I've had out on grass and I have to admit that it's a pretty beautiful sight to see those little noses come in from the pasture all brown from nosing around the edges of the field and around the buildings.  It's amazing to watch the mothers who pretend not to care about their babies suddenly look up with alarm and blat when they realize they aren't at their side, and the subsequent reaction of the babies who come running, bleating and crying about being left all alone! 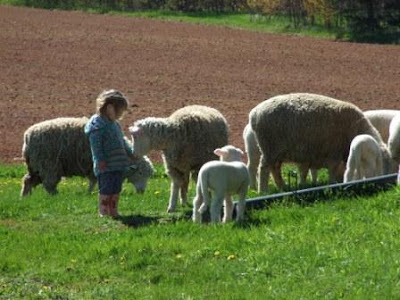 Speaking of babies, here's a picture of my baby checking out the flock during their first day of grass and sun for 2010.  You might wonder how a good organic farmer could wait so long to let the animals outside, but because our rotational grazing is so intensive during the summer, we have to make sure we have a good growth established and that we give ourselves enough time so we don't run out of pasture too early in the fall.  It's a fine balance and although the weather has been nice for a while, I always worry that it's too early. 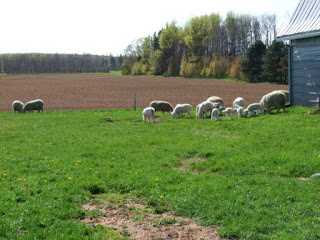 On the homefront, my garden is finally coming along nicely.  I'm lucky to live on a farm though. Even on a 16th of an acre (if that!) I get to have a manure spreader come in, make a couple passes and have my compost done for the year!  All I had to do was till it in.  One of the benefits of farm living! 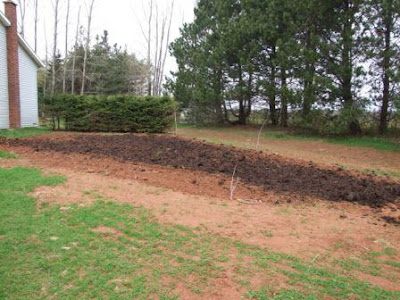 It's taken some time and some sweat, but I'm determined to go with my old favorite method of permanent raised beds (which really means not so much raised as dug out ditches).  I did it before and loved it for a couple of reasons. a)it keeps me organized.  There are no half rows of different vegetables here and there.  It's easier to tell yourself you're going to weed two beds, rather than an indefinite amount of rows. It won't make sense to everyone, but it works for me. b)(and this is the most important reason-)the kids know where they are allowed to be.  Telling them to stay "between the rows" doesn't mean anything when they might interpret that to mean 'stay between the rows of dirt and on the plants'.  So this way, "Stay in the DITCH!!!!" is pretty clear.

Anyway, I lost all my hard dug ditches when we did the water work last fall so it was starting from scratch this year.  It's a strange shape now, unlike my old reliable rectangle, which made for some odd beds, but overall I'm really happy with it.  I've got everything in except my starter plants (which I gave up starting a couple years ago).  We eat a lot of peas here and two years ago I vowed to never grow peas again (not worth the work and the worms), but because I'm determined to be more food self-sufficient I went ahead and made one of my biggest beds, my pea bed.  I won't be at all surprised to make the same pea ban again come mid-summer, but I'm going to give it a good try at least.  I'm looking for potato seed for a variety called Fabula, if anyone knows of any.  I discovered it when I bought NB potatoes in PEI (AHHKK!! If I don't write again in a few days you'll know I've been lynched!) and fell in love with the buttery, smooth, almost sweet variety.  I used to think that all those PEI'ers who went crazy over different varieties were ridiculous-a potato is a friggin potato, right!?  NO!!!   Not if it's a Fabula!  Anyway, if there's any seed out there, please let me know!!! 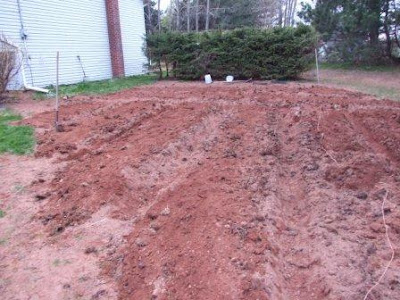 It's spitting rain out right now and Mark is doing a rain dance-saying 'our livelihood depends on it.'  Not sure it's that desperate here yet, but the ground is pretty darn dry for sowing season.

Hope this finds you sowing and smiling.