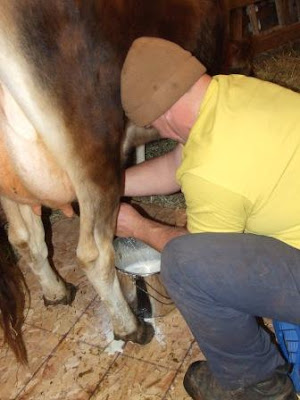 So the learning continues here at Barnyard Organics where our latest and largest challenge is Rosie's preference for...er...eliminating during milking.  I think we're slowly breaking the habit with some good jabs and...um...stern talking to's.  We've also refined things a bit with a sturdy floor for milking, versus the bedpack and found that even though we're sharing the milk with Mark's sister, we simply can't use it all fast enough, so are trying letting the calf out with her most of the time.  We milk her out twice a day and still have lots, so until there seems to be a problem, I think this will work best for everyone.
This is another case of Mark doing something that is usually not done, or even frowned upon by most farmers and me playing the role of doubting Thomas, giving all the reasons it shouldn't work.  Why don't more one-cow milkers leave the calf with the cow? Why don't any of the hippie family cow books that I have, discuss that as a real option?  Is it because more people use more milk than we do?  Is it bad for the cow? I'm watching diligently for signs of mastitis, but it seems to reason that as long as we are milking her out dry twice a day, it should be fine, right?
Anyway, I guess we'll see.  Here's a rather bug-eye picture of Miss Poppy who is much cuter in person.  She's got a very 'beefy' build to her, but a cute little face.  We're not sure of her future yet, but for now she makes for good giggles as she bounds around the barn. 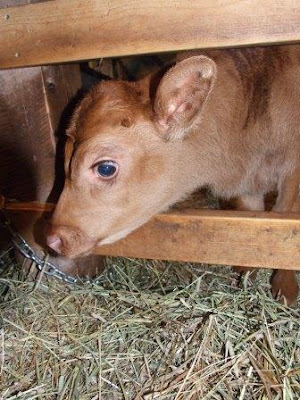 Not much else new here.  Got a nice dose of snow last night and Lucy and I have been having some delicious white mitt-fulls for snacks (although not enough for a full bowl yet).  Cracking the layer of ice on the water troughs has been added to the chore list, but other than that, life is trucking along quite nicely.
I had a nice, quick visit to my home in NB and came back with a dish of maple butter, which along with the Jersey cream and a guilty conscience that left with the warm weather, has been making for a rounder me.
Since I've been a bit lacking on the rants lately, I'll just leave you with this.
I see where fast-food giant, Wendy's, is advertising "Natural Fries" because they have sea salt, rather than regular salt.  I think this is a perfect example of just how fluent and useless the word "natural" is when it comes to our food.  There are no standards, no requisites, NOTHING that makes something natural other than the label.  So, when you're looking at a product that says it's natural, remember that it could mean that the farmer just doesn't want to certify organic for some reason, or it could mean that they're using sea salt rather than table salt, or...it could mean nothing at all. If you really want to be sure, go with a standard that has a set of strict rules, is enforced and monitored; like organic certification.  Just sayin'.
Here are my sous-chefs at work, testing the durability of my kitchen drawers. 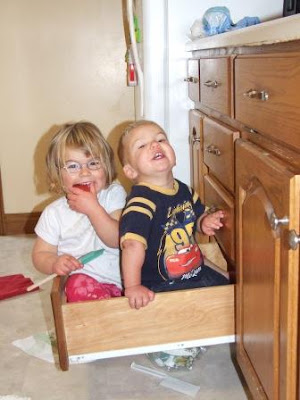 Hope this finds you cuddled up cozy enjoying the first true signs of winter!