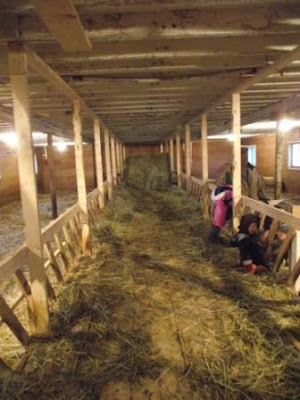 As per the original plans, we tried out the big round bale in the 'new' sheep barn yesterday.  And I will have to admit that it worked pretty well.  So far, anyway.  Mark did the rolling, after the tractor tipped it in the doorway, but it rolled a lot easier than I thought- especially for having a square side after a few months outside.  If you haven't guessed, we moved the girls in, out of the rain.  We probably could have gotten a little bit more out of the pasture, but this rain just isn't giving up and I could see visions of footrot and moisture-loving parasites breeding in the bazillions with every raindrop.  So, we moved them into a pretty cozy, dry and breezy barn where they can laze around and eat to their hearts content.  About half of them are due to lamb in a month or so, so I wanted to start giving them a little bit of grain to get their condition up after a long summer on pasture.  I also like to give some probiotic at this stage, and it's easiest to give with the grain, so we'll be starting that up soon too.  Ah yes, back to winter chores. 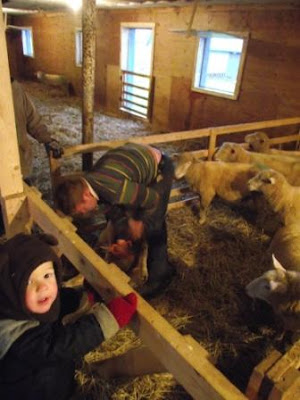 Speaking of winter chores, if there is one thing I can say about Mark, it is that he does not 'arse around' when it comes to getting things done.  I hadn't even mentioned trimming sheep feet, and in fact had suggested that it probably wasn't a big priority right now, but when the kids and I went over the barn this afternoon, there he was in the tell tale postion; bent over, red-faced, cursing and struggling with ewes who refuse to take a good pedicure like a lady. You can see Wilson playing the role of apprentice, preparing for the day he can take over this favorite chore of a shepherd (or a shepherdess' husband in this case!). 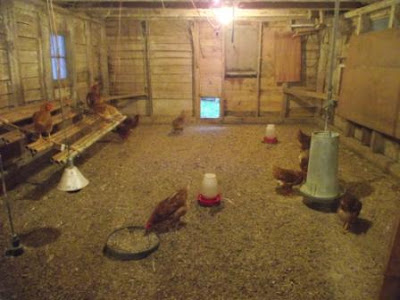 In other news, our new hens have FINALLY started to lay!!  We got them about a month later than other years and it feels like eternity since they first stepped onto the farm back in June to last week when we rejoiced over the first tiny egg.  Since we have 28 of the new girls and still have 20 of the oldies, we didn't want to put them all together in the oldies pen.  The oldies are sooo bossy and territorial that they don't let the young'uns eat or roost or anything, and numbers this year just didn't leave us enough room to put them all together.  So Mark (again, not wasting any time!) put together a pretty cozy sorority house for the young ones. 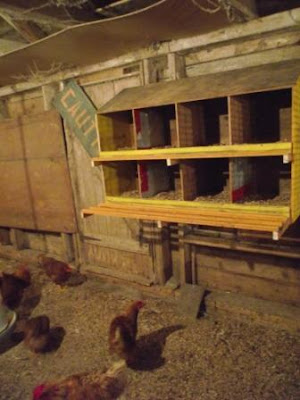 I'm not sure what the establishment of such a lush coop means for the future of all the old girls (since we usually...er...dispose of them when the new ones start laying, but everyone is still laying pretty well, and with the extra house...who knows!  It could make for a LOT of eggs around, but I'll worry about that great kind of problem when it happens. 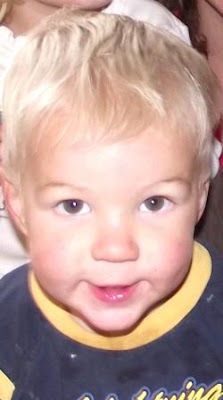 I had to include this picture that I found while going through some photos and it stopped me in my tracks.  I always say how much Wilson looks like his Dad, but this pic really proves it.  There is no denying the genes in this pool!

Hope this finds you high and dry!