A Not- So Fine Line

I stated a while ago that I was going to branch out and do some reviews of the various food/agriculture events that we go, but then after the Roving Feast, fell a bit flat on that promise.  Not from lack of thought or neglect however.  I have been purposely contemplating how to write my review of "Nigwek: Festival for an Organic PEI" and the "Organic Harvest Festival" because some good friends of ours (and readers of this blog) played key organizational roles in both and I don't want to seem ungrateful, but I (as usual?) have some complaints.  Well, just one complaint really.

Both of the events were geared for the general public, not the farmers.  And I can appreciate that both are trying to ease the public into the idea that organic can be an everyday commitment, not a rare treat.  Nigwek had a small mix of farm vendors, but was really about the speakers and the music and promoting the idea that an organic PEI is something that we can actually strive for.  Admittedly, Nigwek never claimed to showcase the organic farmers, so I guess I can't fault them for that.
Overall, I suppose that it was a pretty big success by most benchmarks.  It was a very windy, but very sunny Sunday afternoon and there were thousands of people who passed through Victoria Row, browsing through the vendors, listening to the music and taking it all in.  As promised, there was a diverse and good mix of music for all tastes, good speakers and it was essentially, a street party for the masses, aimed at promoting organics.
We had some problems with our plans to cook our edamame on site, due to some Coleman stove issues (and the wind) and the organizers were quick to step up and find an alternative.  We had the kids with us for the day, which always adds an extra element of chaos, and my nerves may have been a bit stretched to start with, but overall, we sold out and got a lot of names added to our list of interested customers from Charlottetown (something we had been hoping for).  Looking back, although by the end of the day I remember being exhausted and saying I wouldn't do it again, maybe like child birth, time heals all wounds (and bad memories). 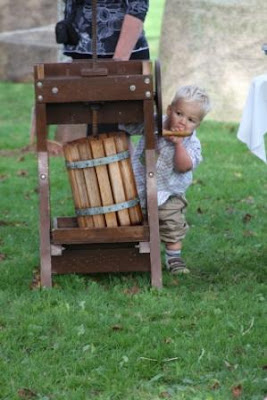 photo by Amanda Jackson
Onto the Organic Harvest Festival, which I promoted heavily on here and on our farm Facebook site, and the true issue of contention for me, on this grey wet morning.  I was going to just avoid commenting or reviewing this event all together, because overall it really was a raging success, but after reading the latest ACORN newsletter in which there was a thank you to (nearly) everyone involved, I've taken up my usual stance on the soapbox, with a purpose.
This festival is exactly what the Certified Organic Producers Coop needed to do.  It was a beautiful day; the activities for the kids were perfect; the chefs and their food was amazing; the venue was perfect; the music was just right; the organization was outstanding, for the most part; and I think it's safe to say that everyone had a really good time.  The food was all from PEI and nearly entirely organic, which is an organizational feat in itself.  But where did that food come from?

Had I not been one of the farmers who provided some of that food (lamb and eggs), I would not have known.  I realize that in organizing a big event like this, particularly for the first time, that some things are going to fall through the cracks, but I'm disappointed that once again, it was the farmers who got left behind.  The run up to the event promised farmer profiles and admittedly I didn't manage to cover the entire grounds of the event (between trying to eat and chasing toddlers with candy apple weapons through straw piles) and the profiles may have been inside the building on-site, so I will blame myself for not seeing them.  However, there were signs beside each menu item explaining what food item was what, with no mention of where that food came from.  It seems like an oversight to have not simply added, "made with beef from ABCD farms" or something to that effect, below each dish, when printing those sheets. (Note, I don't even know whose beef it was and I think there's only two organic beef farmers to choose from on the island)

So let me repeat that overall, it was a great event and I hope to see a repeat of it in the future.  I wasn't going to mention it at all until, as I said, the ACORN newsletter came out with a review of the event, and once again, there was no mention of the farmers.  The thank you included the musicians and the chefs, who undoubtedly deserve the thanks, but yet again, no mention of the people who raised and grew the food that everyone so enjoyed.  It's a small thing for me to give a discount and drive my lamb to Brackley and despite what it seems like on here, it's not something I expect an individual thank you for, but a simple recognition of the farmers in general, who dedicate their lives to producing this food that we are trying so hard to promote, might go a long way to some.

As a side-note, I would estimate that 75% of the people I try to sell lamb to say, "I've never tried it, I don't think I'd like it".  At the Festival, Chef Emily, from The Dunes in Brackley did an amazing lamb kofta with our organic lamb and I like to think I might have been able to capitalize on a sale or two if the eaters had known where they could get some lamb of their own.  But that's just my personal problem. 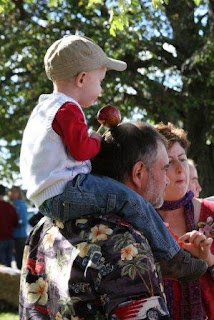 I love this picture (taken by Amanda Jackson) of some friends of ours because you can see what a threat those amazing candy apples were to all the parents.  Lucy and Wilson's became little straw balls on sticks, but they weren't letting them go.

So overall, I'm glad I live on PEI where these events get a lot of support and attention, and I'm soooo grateful that there are people out there willing to invest so much time and effort into promoting organic agriculture.  (I know I shouldn't complain if I'm not willing to step up myself)  I wouldn't change anything about the Harvest Festival except to throw in a bit about the farmers (and I feel pretty sure that it was just one thing that had to be let go as time got close and details gained perspective)- and I'm sure that will be a priority another year. So, thank you Roy and Amanda, please don't think me ungrateful, but it wouldn't be me, if I didn't say my piece!