Sort of like when I went to Africa and realized too late that I'm simply not a worldly, traveling kind of girl, being officially unemployed this week has really proven to me just how much I value being home.  I am an entirely new person and I notice a big difference in the kids as well (probably due mostly to the lack of stress vibes being sent out around the house, by me).  Give me a hot oven and diapers over an office and deadlines anyday.

It's 7:30 pm and if I look out the front window, I can see the twinkle of the combine lights as Mark scurries to finish up as much of the soybean harvest as he can before the predicted week of heavy rain hits.  Frustratingly enough, I don't think he'll be able to finish what's left tonight and there will still be probably 10-20 acres left for yet another day.  While this isn't really late for soybeans, it sure feels like the harvest has been drug out this year.  It's early to tell yet, but I think the soybean crop is looking fairly good, especially relative to our grain yields for this year.  They certainly are coming off clean, which is a nice testament to Mark's weed management skills.

My family likes to give me the gears about my so-called 'rants' on this blog, but I would like to take a moment to point out that in the latest ACORN newsletter (which is circulated to all the ACORN members in the Maritimes, my entry on GMO's (inspired by the super(?!) salmon) is featured on the front page as a 'guest editorial'.  So there...hmph.  :)

And speaking of rants, I've got a couple saved up that I'm just waiting for a quiet nap time to write about.  Stay tuned for that.

In farm news, everything (except the ram) is still out on pasture, but the grass is starting to get a bit thin (especially with frost like we had this morning), so the barns have all been cleaned out and re-bedded, ready for move-in day.  Rosie has been nice enough to wait until harvest is done to calve, so she's still on the watch list.   The last of the lambs have been shipped and are in the freezer.  Island Taylor Meats cut and wrapped this time and although their price is more, they do such a nice job (plus they can make sausage for us).  Each cut is labeled and the sides have a great mix of cuts to suit anyone.  I still have a few sides left, so if you're interested, let me know.

I had a request for a Halloween shot of the other spook from this house, so here ya go sis.  Buzz buzz.  How long do Halloween treats last anyway!??!!  We only went to 4 houses!  It doesn't help that we only had three spooks here this year, so there's a plethora of left-over treats to tempt the tastebuds...ugh.  It doesn't help that I get weighed every two weeks now!  Yikes. 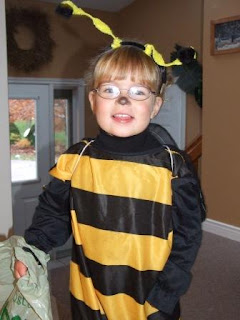 Anyway, I hope this finds you recovering from a sugar and chocolate induced coma, starting to feel the pull of hibernation in the air.