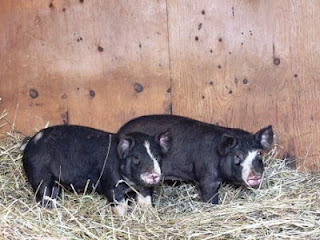 Some girls dream of being princesses or glamourous celebrities, but after today, I feel certain that I've got my dreams come true (with the exception of course of the harsh realities of our ignorant and blissfully stupid government-see: their response to the UN Envoy of Food's report about Canada, for just 1 example---ugh).
But back to my farm princess life...
We got two weaner pigs today and they've already added a whole new element of excitement and novelty.  There's a name contest on and the winner gets a package of sausages.  They'll be GMO-free from here on out and I dare you to find GMO-free pork.  It's a rare commodity for sure.  So excited.
I sat on a conference call tonight as secretary for ACORN and was once again happy to be involved in such a relevant and important organization and to be able to share the table with such forward thinking and optimistic farmers from a variety of backgrounds.
I put new eggs in the incubator tonight, while the mixer churned butter in the kitchen.  Those two actions, hatching eggs and making butter feel like a little food revolution to me and I'm so blessed to be able to have such a deep rooted connection to our food.  The butter was nearly neon yellow this time, with Rosie being out on pasture all the time now and had that spring smell to it, which I used to turn my nose up at as 'green milk', but now understand to be the 'terroir' of a time and place that only REAL food imparts.
Rosie has some sort of rash that began on her udder and has moved to her legs.  There are many theories floating around, but the most popular seems to be some sort of mite from the latest straw we put in her bedpack last week.  We are stumped as to the mites' origins as it is our straw from our storage, but there is definitly inflamation of some kind.  One suggestion was to slather on Vaseline to 'smother the mites' while others recommended sprinkling Diatomacheous Earth. I've done both and I think maybe it has stopped spreading.  A Jersey farmer was here today who claimed that Jerseys are the very worst animal for reacting to various plants or food.  She has only been out on the pasture for a short while so that is a good possibility as well (although again, same pasture as ever...).  Here's hoping it's cured up.  It made for a bit of work as we did clean out her newly cleaned barn to replace the straw and then realized we had bedded the pig barn with the same stuff, so re-bedded that before Mark went to get them today.  Due diligence.
I had also intended to get a batch of wine racked off for the summer, but that will have to wait until tomorrow morning.  Along with opening up a bigger brooding area for the rapidly growing chicks, putting straw down on the sheep pasture walkway (to discourage grazing there...will it work?), catching up on farm accounting and using up that roundsteak that is sitting in the fridge waiting to be made into stew.  I wonder what the afternoon will bring.  Probably most of the items on that list since it's daydreaming to think that will all go as smoothly as planned.  And then I've got derby practice tomorrow evening, so a great finish to a busy day.

And speaking of daydreaming, I'm past ready to do some night dreaming.  I'm off to try to get the green butter smell off my hands and compose an imaginary letter to all little girls about the life of a REAL princess, a Farm princess and how much more fun that is than the alternative.