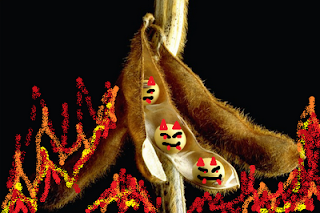 So while I have been sleeping apparently, soy, along with it's evil brother corn, have been declared the bane of existence.  Everywhere I go lately it seems as if someone is touting a corn and soy-free (insert food product here).
I was directed to a blog earlier today of a farm in the US which was marketing its laying hens as gluten-free, corn-free, soy-free and (wait for it) grain-free.  Grain-free chickens.  Further down I read that the chickens are free range, so eat the usual grass, insects, etc. as well as kelp meal and SEEDS ("NOT Grains" it clarified in brackets). I am curious as to what exactly the difference is and which
'seeds' they might be feeding these hens.  I am also curious how grains were deemed not fit for hens, but somehow the raw milk from their cows is natural chicken fodder.  Hmm...I am mentally picturing Rosie standing still while one of the hens go in for a drink.
So here's the thing.  I don't really care what anyone feeds their chickens.  It's really up to the customer to care and to make their own decisions (and if you want 'grain-free' eggs be prepared to fork out $12/doz- yes you read that right).  If you care about what the hens are eating that lay your eggs, good for you.  But please be informed.  Even if you see corn and soy-free everywhere you turn lately, ask someone why that is and what it really means.  (and then let me know.)
Because I'm having a hard time finding an answer to that question.  I know of four farms off the top of my head who avoid corn and soy in any ration in anything they feed to ANY animals.  I understand (and have written on here before) about the problems with cattle eating corn and let's presume for the sake of argument that sheep would fall under that same category, being ruminants as well.  And let's throw soy under the bus as well, since it's known that ruminants are meant to graze, not gorge on grains.
But let's go to the non-ruminants, like pigs and chickens.  Since when did it become dangerous to feed pigs corn and soy?  And chickens?  I understand the questions about pumping animals full of high energy, high protein feed to get them to market as soon as possible, but that is a METHOD not the fault of the grain itself.  Fed in a balanced ration and healthy manner, is it any worse than any other grain?
I know, I know, it's about GMO's right?   Right.  GMO's=evil.  Most corn and soy =GMO.  So, corn and soy=evil.
But these corn and soy free farms don't seem to care about the GMO part- they are simply dead against those two grains no matter what.
I don't know if it's because they don't trust the system to bring them a guaranteed GMO-free product? This is a fairly valid concern, given the prevalence of GMO's in the corn and soy system, but there ARE safeguards in place.  For example, we test EVERY load of beans that comes to the farm with a litmus test which varifies the round up ready gene in soybeans.  And we've been so fortunate to have dealt with such careful farmers that we only once had to reject a load due to contamination (and we've dealt with a lot of beans over these last few years).

The final straw that was the reason for this post is that I keep hearing comments regarding the horrible things that growing soy does to the soil.  Soy is a legume, which means it sequesters it's own nitrogen, which means it needs little to no fertlizer.  That's a pretty big deal and a pretty sweet magic trick on the growing things scale, I'd say.  Soy also leafs out pretty quickly, and fills in gaps between the plants, thus shading out weeds and requiring less weed control than many other grain crops.  It can be grown in rows which makes cultivation possible.  Two negatives are that it doesn't leave much residue and that it's usually harvested too late to fall plant anything behind it.  But I'd say the positives are pretty strong on this one.

This entry wasn't intended to be a rant, I am sincerely hoping for answers from someone who knows why soy and corn are on the naughty list, besides the obvious. Is it a marketing thing at this point? This kind of post is exactly what makes the lines in agriculture so hard to draw and cause frustration for those trying to make a point with their operation and it comes down to semantics.  And now there is a consumer out there, who thought they were saving the world by buying a soy- free egg and now wonder what the heck to think?!  This crazy food world of ours is just that- crazy.  Sometimes I think that we are our own worst enemies, constantly adding to the fears and worries of eaters, causing everyone to give up trying and just eat cheap and easy.
Don't give up!!!  Just do your best, trust your farmer and meet your food while it's still growing.

upon re-read, this post came out much more defensive than intended.  I'm sounding a bit like the beef producers of the USA after Oprah declared she'd never eat another burger. And maybe, I'm not all that different anyway.  :S